Is This Your First Look At The Mandarin in "Iron Man 3?"

Marvel has been running a Facebook "like us!" campaign for the last week or so, promising to debut an early look at "Iron Man 3." At this point you kind of HAVE to know it was just going to be one of those "trailer for the trailer" things, but whatever - it worked, and now the 18 second "pre-preview" is here. Highlights include Tony Stark dealing with reporters, Pepper Potts in trouble, the new gold armor in motion and Iron Man facing down what looks like a half-dozen armored enemies.

Hit the jump to see the teaser and a still:

Okay, short preview is short. I'm hoping that the long one features that "Iron Patriot"-inspired suit that's been seen in the early stills - I have a feeling that U.S. audiences who've never seen it before (in comics or otherwise) are going to flip for it. But the "HEY FANBOYS! WAKE UP AND GIVE US FREE HYPE!" money-shot comes at 00:08 - a quick glimpse at the back of... some guy's head: 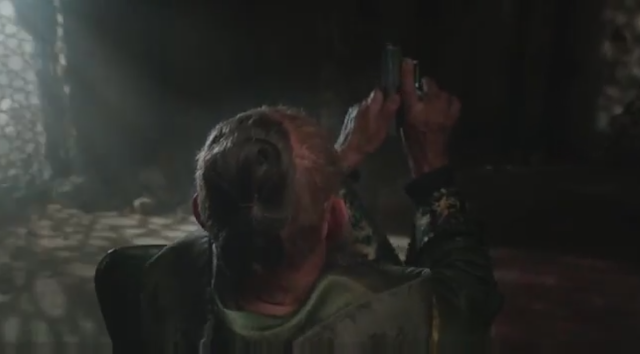 Iron Man's ultimate enemy in the comics has generally been The Mandarin, a technology-as-magic "sorceror" generally depicted as an ancient-looking Asian man with long hair and gold robes with elaborate gold trimmings. That would certainly seem to be who we're looking at here. AWESOME. He's been referenced in the series before (though Middle East based, the terrorists in IM1 had Mandarin-style fixations on Genghis Khan and were named for his alien weapon from the comics, "The Ten Rings of Power) but it had been reportedly felt that he was a little too strange and a little too borderline-racist to show up in a modern movie - but when you're the immediate follow-up to the biggest superhero movie ever you don't have to worry about those things anymore. 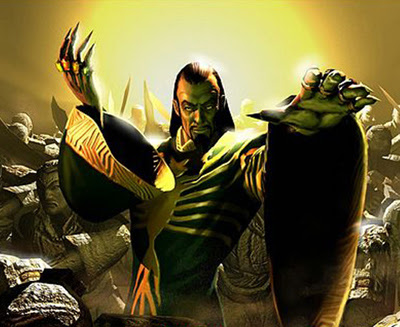 FWIW, I think he'll probably still end up revised into a non-specifically Eastern man with an ancient China fixation a'la the terrorists in Part 1. SDCC audiences supposedly saw a full shot of known main-villain Ben Kinglsey (who is partially of Indian descent, something everyone manages to forget whenever he plays a non-caucasian character) looking unmistakably like The Mandarin from the front - hopefully the rest of us will see the same in the "full" trailer.

I think this is a good idea - while the "Iron Man" movies ARE going to have to go back to being their own thing post-"Avengers," they really do need to get him up against bigger (in terms of personality and power) antagonists now that everyone has seen him battle a God and an Alien Army. Mandarin should accomplish that nicely.
Posted by MovieBob at 2:56 PM

Awwww yeah! Iron Man versus his arch-nemesis at long last! And in full on classic comic robes too! It doesn't really matter whether he is Chinese, Indian, Half-Mongolian or whatever they want him to be, just as long as he gives Iron Man his biggest solo challenge yet.
Will be interesting to see if they actually show his rings as actual ring-weapons (magic? tech?) or have the terrorist cell "10 Rings" be the movie-verse equivalent or even both.

Pepper looks like she's in a Six Flags meets the SAW series sort of situation.

Kingsly wasn't shown in the SDCC trailer, just his voice.

I expect to see him in this new trailer though. But then again, we didn't necessarily get a good look at Red Skull in the first Cap trailer.

am i the only one who thinks the new armor kind of looks like yellow ass?

Wasn't the Mandarin british or something in the comics?

Yep: son of an english noblewoman.
So, yes, it would not be too hard to turn him into a Brit. In fact, if the production team feels bold, they could also keep his father pedigree: make the villain the son of a rich aristocrat from the late Qing era, and no one will dare complain, because nothing is more reliable as an acceptable target than the good, old, corrupt, inept, parasitic, decadant, upper-class of fallen empires.

1. I don't see U.S. audiences having any problem with The Mandarin as a main villain, considering how Conservatives are probably dying for a movie with a Chinese antagonist.

2. I thought Gwyneth Paltrow said she was quitting superhero movies, and I was looking forward to getting a new Pepper.
Honestly, Paltrow's acting is just abysmal.
Think of the scenes in Iron Man 1 when she's alone on screen just talking on a cell phone / walkie-talkie.

in reguards to his armor:

shouldnt there be less gold/yellow? because the comment on it was that is was ostentatious, but since the first film, and the avengers, tony seems to have developed more as a character, gained a little more maturity/responsability, so wouldnt that be better reflected in the armor if there was less gold/yellow?

Ok I liked the idea, but not the design of the more gold centric suit. But now just seeing bits of it in motion makes me like it a LOT more. CAN'T WAIT FOR TUESDAY!!!!!!

(though Middle East based, the terrorists in IM1 had Mandarin-style fixations on Genghis Khan and were named for his alien weapon from the comics, "The Ten Rings of Power)

They weren't Middle East-based, they were Central Asia-based. That makes the Genghis Khan fixation a lot more tenable.

@Nixou: I've been thinking the same thing. They'll make him something like half-British, half-Manchu, with Uyghur ties. That should play well with the Han Chinese majority.

1. I don't see U.S. audiences having any problem with The Mandarin as a main villain, considering how Conservatives are probably dying for a movie with a Chinese antagonist.

No, but the Chinese investors who are putting up a large chunk of change for this film might have a problem.

2. I thought Gwyneth Paltrow said she was quitting superhero movies, and I was looking forward to getting a new Pepper.
Honestly, Paltrow's acting is just abysmal.
Think of the scenes in Iron Man 1 when she's alone on screen just talking on a cell phone / walkie-talkie.

It's not that she's a bad actress. It's that Jon Favreau's directorial style doesn't mesh well with her acting style. Maybe Shane Black can better play to her strengths.

The risk of having a villain associated with China is having the PRC state forbid the film from airing in the Chinese market, and potentially blacklisting the production studio and banning any of its films. I think the risk of that was the major reason that Red Dawn's new invasion force was changed from big China to ludicrously tiny North Korea. As if North Korea could possibly invade the US mainland. But there had to have been some reason they would spend all that money and delay the release date in order to change all the flags and such in post, right?

China won't allow any foreign films to slander them, in their eyes. And they're a huge market, and getting huger by the year.

Yeah, as awesome as seeing the Mandarin will be for us fans, if they hope to Iron Man 3 not to feel like a step down after Avengers...well, he better have brought Fin Fang Foom along.

I still tend to think they should go down more the Justine Hammer/Ezkiel Stane/Mandarin combo that's just finishing up in the comic universe.

Bob, I don't think that's Mandarin. He might be a henchman. But I would imagine Mandarin would be a bit more...grandois than that. Just me.

I just saw the official photo and this was my thought: why the hell is Rasputin in an Iron Man movie?:

My hope for this is that they roll Mandarin out for this movie with implications for Ultimo in the next. After all, with what we know is coming in the next Avengers, it shouldn't be outside the implicit power level.

MovieBob
Bob is a part-time independent filmmaker, part-time amateur film critic and full time Movie Geek. He is heterosexual, a pisces, and a severely lapsed Catholic. He is a tireless enemy of censorship, considers his personal politics "Libertine" and enjoys acting as a full time irritant to overly serious people of ALL political stripes.